Rotting seaweed has plagued the Caribbean for more than 10 years – but our research shows how we could clean up beaches and emissions at the same time, by turning what’s now rubbish into renewable electricity and fertiliser.

Pelagic sargassum is a brown seaweed that floats at the surface of oceans, particularly in the Atlantic.

Over the last decade, unprecedented amounts of this seaweed have washed up on coastlines of the Caribbean region, Gulf of Mexico, United States and West Africa, triggering human health concerns and negatively impacting the environment and economy.

Recent satellite images have spotted more sargassum at sea than in previous years. Experts fear this year’s influx could be the worst since the catastrophic 2018 season.

Given the noxious hydrogen sulphide gas emitted by the seaweed as it decomposes and the frequency with which these influxes have recurred since 2011, sargassum has devastated Caribbean economies that depend on tourism and fisheries for survival.

But there is something we can do.

Our team of researchers has developed a new approach to turn sargassum into bioenergy and fertiliser – a solution that could help restore beaches, create jobs and produce renewable electricity.

The problems with sargassum

Tourism is a major sector in the Caribbean region, accounting for 30-40% of the gross domestic product of some of the small nations.

Sargassum has also triggered a state of emergency in the fisheries sector of several islands. The seaweed has resulted in reduced visibility, higher occurrences of fishing net entanglement, widespread boat damage and lower fish capture.

The marine ecosystem is further affected because sargassum accumulation on beaches and along shallow coastlines impairs the nesting of sea turtles and causes fish die-offs due to deoxygenation and toxins in water.

Human health and the integrity of infrastructure have also been compromised by the hydrogen sulphide, a corrosive and toxic gas with a rotten-egg smell, emitted as the seaweed decomposes.

Though some small-scale attempts have been made to make sargassum useful, landfilling remains the primary way to manage the influxes. This approach is an expensive practice, with high labour and energy demands. 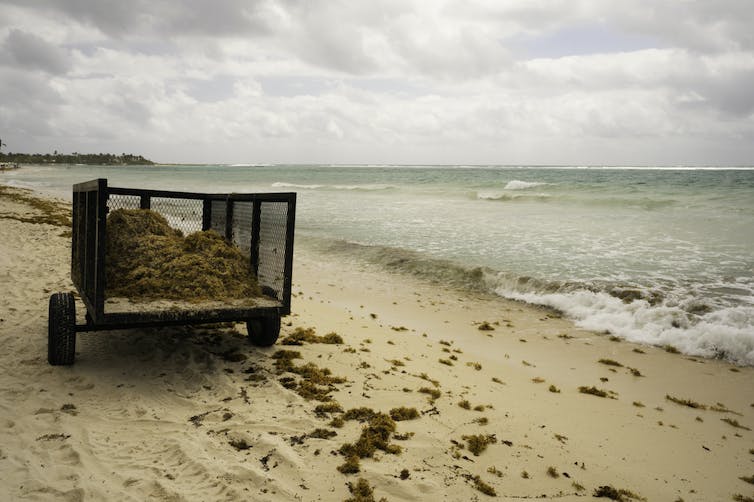 The current approach to managing sargassum is to manually collect it from the beach and take it to landfills. Getty Images

Our new solution for stinky seaweed

Sargassum is promising as component in anaerobic digestion systems – a process through which bacteria break down organic matter without the presence of oxygen, resulting in biogas.

The seaweed is rich in polysaccharides, a good source of energy, and low in lignin and cellulose, which are difficult to digest.

To overcome this challenge, our research takes a new approach: for the first time, combining the technologies of super hot water pre-treatment with anaerobic digestion system.

Hydrothermal pre-treatment is a green technology that uses high pressure to make water super hot (140°C), while keeping it in a liquid state. Treating sargassum in this super-hot water for 30 minutes helps break it down.

Hydrothermal pre-treatment also reduces the hydrogen sulphide content in the generated biogas from 3% to 1%.

In the second step, hydrothermally pre-treated sargassum is processed with food waste or other organic wastes in the anaerobic digestion system.

Putting different organic wastes together helps balance out the feedstock, meaning more biogas can be produced.

What’s more, the substance that remains after biogas production is nutrient-dense and pathogen-free, making it safe and useful as an organic bio-fertiliser or soil conditioner. 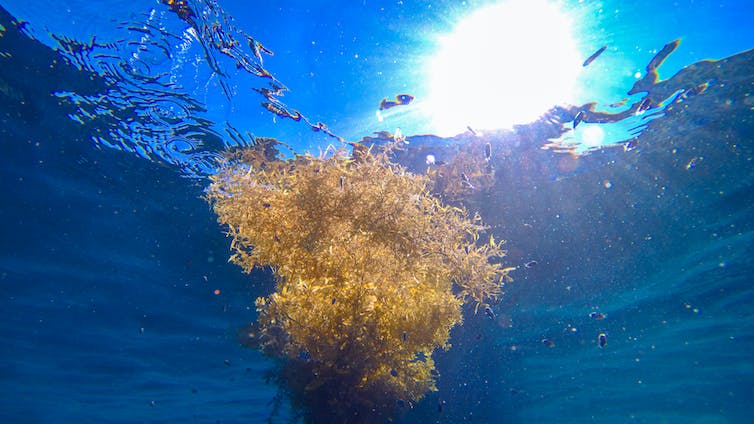 Researchers believe climate change is one of the reasons sargassum blooms have been increasing in the Atlantic. Massimiliano Finzi/Getty Images

The potential for a Barbados biorefinery

Building a sargassum-based biorefinery equipped with hydrothermal pre-treatment and anaerobic digestion technologies would offer a number of socio-economic and environmental advantages to Caribbean countries.

Most obviously, a biorefinery would supply electricity to the national grid and produce a bio-fertiliser for local and international use.

A proposed biorefinery in Barbados could handle an annual feed input of 15,750 tonnes of hydrothermally pre-treated sargassum mixed with raw food waste. This would handle a significant portion of sargassum influx, keeping it out of landfills.

This feed input could yield 0.69 gigawatt hours (GWh) of electricity, 1.04 GWh of heat and 15,000 tonnes of solid-liquid biofertiliser for Barbados.

While sargassum is available only seasonally, a biorefinery could run solely on food or other organic waste when there is no seaweed, making the refinery a sustainable, year-round source of green energy.

Implementing this technology would also help increase the economic sustainability of the tourism and fisheries sectors, assist with waste management and help develop industry and infrastructure in the Caribbean.

However, the cost of development and management of a biorefinery in Barbados has to be carefully managed and will require substantial support from the local community.

According to our analysis, the biorefinery will not break even on power generation alone. Maximum profits could be achieved through selling all of the fertiliser to international markets – but this approach provides zero support to local food security. Our recommended option would be to split the waste 50/50 between local farmers and international markets.

Since climate change appears to be a factor in the increased sargassum blooms of the past decade, contributing to global efforts to mitigate climate change may eventually improve the situation.

In the meantime, we could have an effective way to deal with the stinking mess ruining Caribbean beaches.