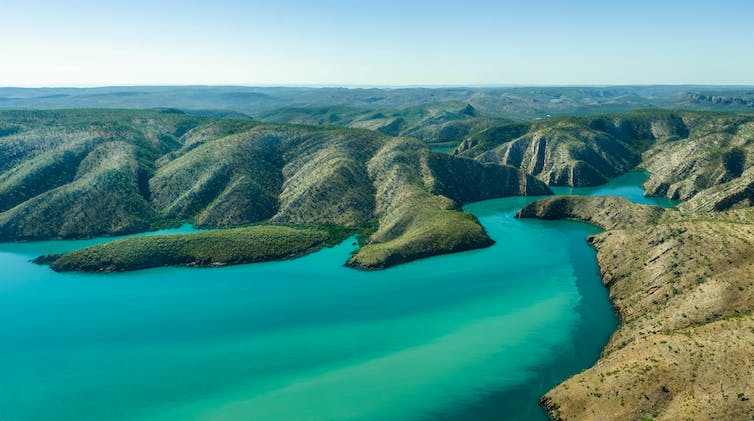 Recent disasters such as the Black Summer bushfires and the Juukan Gorge destruction highlighted the need to put Indigenous people at the centre of decision-making about Australia’s natural places. But what’s the right way to combine traditional ancient wisdom with modern environmental management?

A project off Western Australia’s northwest coast offers a potential way forward. For the first time in the state’s history, Indigenous knowledge has been central to the design of a marine park.

The protected area will span 660,000 hectares northeast of Broome, taking in the stunning Buccaneer Archipelago and Dampier Peninsula. The area comprises thousands of small islands fringed by coral reefs and seagrass beds. The waters support a rich abundance of species such as corals, fish, turtles and dugongs, as well as humpback whales which give birth in the region.

Often, Indigenous input is sought only in the consultation phase of park planning, once maps have been drawn up. But in this case, Traditional Owners co-designed three marine parks with the state government and will jointly manage them. Traditional ecological and cultural wisdom has been embraced and valued, enhancing Western scientific knowledge of a fragile stretch of Australia’s coast.

The marine park co-design is a collaboration between WA’s Department of Biodiversity, Conservation and Attractions and Bardi Jawi, Mayala and Dambeemangarddee Traditional Owners. It will comprise three adjoining protected areas, each jointly managed by a Traditional Owner group.

The Buccaneer Archipelago region has the state’s highest concentration of Traditional Owner communities living adjacent to an existing or proposed marine park.

Local Indigenous people refer to these areas as “Sea Country”. They depend on the waters for food and to carry out traditional practices, and have cared for them sustainably for thousands of years.

But to date, the state’s conservation reserve system has not adequately protected these unique and exceptionally diverse marine ecosystems.

Industry, fishing and tourism are putting pressure on the region’s environment. In particular, the recent sealing of Cape Leveque Road improved access to the Dampier Peninsula and will result in massive increases in tourism and boating.

Adding to this, marine heatwaves and other climate-related changes pose a serious threat to corals, macroalgae and seagrass.

Read more: Why Indigenous knowledge should be an essential part of how we govern the world's oceans

Combining traditional Indigenous knowledge with a Western approach requires methods that are both culturally appropriate and scientifically robust.

In 2018, Bardi Jawi rangers and staff from the Australian Institute of Marine Science carried out “participatory mapping” to design a mornitoring program for corals and fish. The rangers and marine park planners went on to use this method when designing the marine park.

Participatory mapping starts with Traditional Owners and marine park planners documenting the traditional owners’ ecological knowledge, cultural values and aspirations. From this, maps are developed then built on via on-Country observations.

This process allows scientists to record and understand traditional knowledge of an environment in a way that is also useful for Western conservation and management planning.

The co-design approach was built on genuine partnerships, mutual respect and two-way learning. The partnerships developed over several years through other joint projects by scientists and Bardi Jawi rangers.

The department listened to and implemented this strong Indigenous voice in the development of the marine parks’ draft plans.

According to the Traditional Owners themselves, the sea is fundamental to the spiritual, social and physical existence. Their diet relies heavily on food from the sea such as fish, turtles, dugongs, crabs and oysters. Under Indigenous laws, traditional owners are required to protect significant features in the sea and for some groups, resources such as pearl shell has traditionally been collected and used for ceremony and trade.

A WA government document outlines how the proposed marine parks contain “special purpose zones” to protect traditional culture and heritage. They allow for seasonal camping areas and places where Traditional Owners can collect customary food and other resources. They will also protect culturally significant features such as cultural sites reefs, seagrass beds and mangrove communities.

These zones are in addition to sanctuary zones protecting areas of critical habitat, and general use zones where sustainable activities are allowed.

Read more: Will your grandchildren have the chance to visit Australia’s sacred trees? Only if our sick indifference to Aboriginal heritage is cured

Protected areas in marine parks must be sized, spaced and positioned to allow “population connectivity” – the dispersal of eggs, larvae, juveniles and adults through the area.

My involvement in the marine park design included participating in a study which led to recommendations for how best to achieve this connectivity.

The study was part of a bigger program to improve and integrate ecological and social science knowledge in this region. This information was incorporated into two-way learning and planning, which fed into the proposed marine park.

Key to the success of the new marine parks will be the practical capacity of Traditional Owners and Rangers. Indigenous sea ranger groups in the region have already shown they can work with both traditional governance and knowledge structures and non-Indigenous Australian organisations.

What’s more, the Bardi Jawi, Dambeemangarddee and Mayala people have their own healthy country plans. These plans clearly document how they have looked after country for millennia and want to continue this in future.

The Bardi Jawi and Dambeemanagrdee people have also established an Indigenous Protected Area which they’ve successfully cared for since 2013.

Some recreational fishers believe the proposed exclusions are unreasonable. But there is growing evidence fish populations benefit from sanctuary networks. And many local fishers recognise the increasing threats to the region and welcome Traditional Owners playing a larger management role.

It’s hoped the final marine parks plan will find the right balance between the needs of Traditional Owners, commercial and recreational fishing, pearling and other uses.

By involving traditional custodians from the start, there’s every chance we will realise the ancient Indigenous idea that healthy Country means healthy people – and that will benefit everyone.

The author would like to acknowledge the Bardi Jawi, Mayala and Dambeemangarddee Traditional Owners and their continuing culture, knowledge, beliefs and spiritual connection to Country. The author recognises they are Australia’s first scientists.