Will Australia’s new climate policy be enough to reset relations with Pacific nations? Hosted by Fiji, this year’s Pacific Islands Forum will be the first in-person leaders summit since the 2019 Pacific Islands Forum in Tuvalu, which saw Albanese’s predecessor Scott Morrison try to water down a Pacific regional climate declaration. In the aftermath of that bruising summit, Fijian Prime Minister Frank Bainimarama told waiting media partnering with China was preferable to working with Morrison.

Since then, geo-strategic competition between China and the United States has intensified. This contest looms over this year’s Pacific Islands Forum. China is seeking new security arrangements with island countries, while the US and its allies are stepping up their engagement with Pacific nations.

But while Australia worries about China, most Pacific nations are more worried about climate change on their doorstep. A new Climate Council report endorsed by a group of prominent Pacific leaders says committing to more ambitious climate action is key to Australia’s claim to be the Pacific’s security partner of choice.

Security will be high on the agenda

Why is security suddenly important? Because the Pacific has become a region of geo-strategic competition for the first time in decades.

China has become more powerful. That’s seen it invest in an ocean-going navy and seek new security arrangements with Pacific countries. Australian security officials have been particularly worried Beijing could use infrastructure loans to secure a Chinese naval base in the Pacific.

In April, Solomon Islands signed a security deal with China which – if it is anything like the draft leaked online – contains provisions that allow for Chinese military presence and ship resupply.

The deal has changed the dynamic of a region long aligned with the West (notwithstanding Pacific concerns about decolonisation and the impact of nuclear testing). 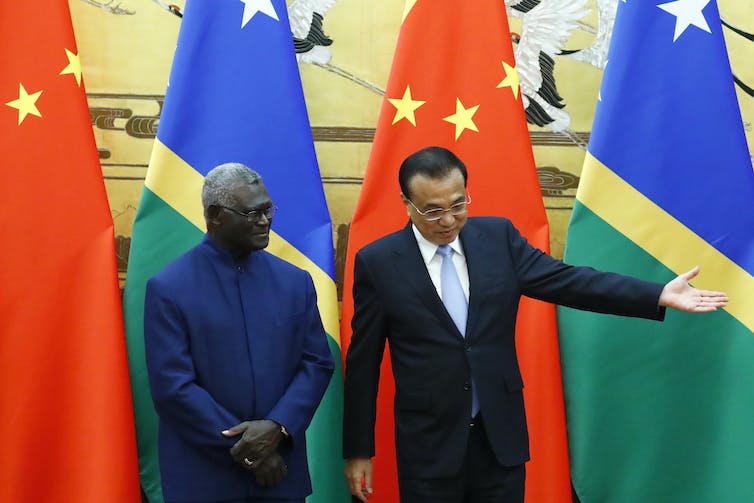 While Solomon Islands leaders say they have no intention of allowing a Chinese base or an ongoing security presence in the country, concerns remain.

Australia’s Foreign Minister Penny Wong – who meets with Pacific foreign ministers today to iron out the final agenda for the forum meeting – wants leaders to discuss the controversial security deal. She says Pacific security should be a matter for the “Pacific family”.

In May, China’s foreign minister Wang Yi toured the Pacific hoping to secure a regional security deal with island countries. The proposal was politely declined by island leaders, who explained there was no regional consensus on the deal. Undeterred, Wang Yi proposed a meeting with Pacific foreign ministers next week, on exactly the same day Albanese meets island leaders at the Pacific Islands Forum.

Pacific island leaders argue growing tension between the US and China does little to address climate change, which they are adamant is the region’s single greatest threat.

For decades, Pacific leaders have called for recognition that climate change is a threat to their nations akin to war. During the first UN Security Council debate on climate change in 2007, Pacific Islands Forum countries argued the impacts of a warming planet for island nations were “no less serious than those faced by nations and peoples threatened by guns and bombs”.

machine guns, fighter jets, grey ships and green battalions are not our primary security concern. Waves are crashing at our doorsteps, winds are battering our homes, we are being assaulted by this enemy from many angles.

Today’s report from the Climate Council backs what island leaders are saying: climate change is the single greatest threat to the region. 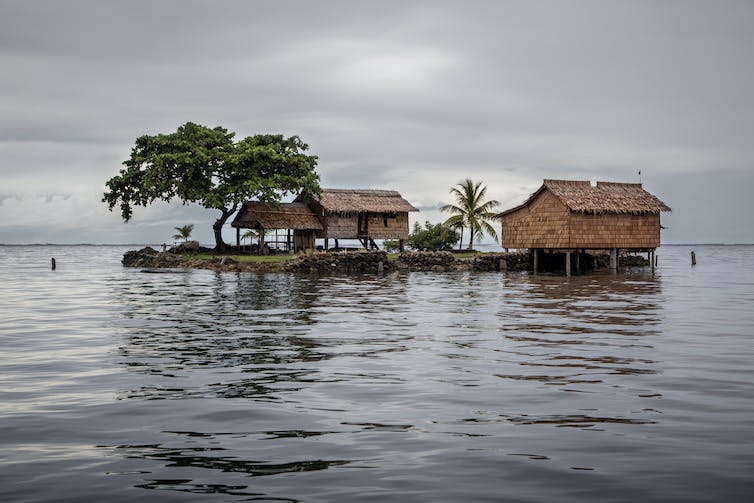 Climate change is an ever-present threat to Pacific nations. Shutterstock

If the world is to have a reasonable chance of achieving the goals of the Paris Agreement, and ensuring the survival of all Pacific island countries, global greenhouse gas emissions must be halved by 2030. A wealthy country like Australia, with high emissions and vast untapped renewable resource, should be aiming to reduce emissions to 75% below 2005 levels by 2030, according to the report.

Australia’s new climate policies have been met by Pacific island countries with a mixture of optimism and wariness.

The new Australian government wants to co-host the annual UN climate summit with Pacific island countries, potentially as soon as 2024. While this is a positive sign, Australia cannot assume Pacific leaders will automatically support it.

Pacific island countries want Australia to do more. That includes moving beyond coal and gas and committing new finance to help island countries to deal with the growing impacts of climate change (including unavoidable loss and damage).

Albanese will have the chance to hear Pacific concerns in Suva next week. It will be the start of an ongoing conversation. If the Australian government listens carefully, and takes meaningful action on climate, it will strengthen its claim to be the Pacific’s security partner of choice.